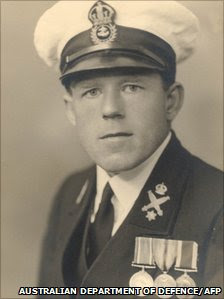 Known to his comrades as Chuckles, British-born Mr Choules joined the Royal Navy at 15 and went on to serve on HMS Revenge.

Mr Choules, who had been married to his wife Ethel for 76 years, was reported to have died in his sleep at a nursing home in his adopted city of Perth.

He is survived by three children and 11 grandchildren. His wife died three years ago.

Mr Choules' 84-year-old daughter, Daphne Edinger, told the Associated Press news agency: "We all loved him. It's going to be sad to think of him not being here any longer, but that's the way things go."

Born in Pershore, Worcestershire, in March 1901, Mr Choules tried to enlist in the Army at the outbreak of WWI to join his elder brothers who were fighting, but was told he was too young.

He lied about his age to become a Royal Navy rating, joining the battleship HMS Revenge on which he saw action in the North Sea aged 17.

He witnessed the surrender of the German fleet in the Firth of Forth in November 1918, then the scuttling of the fleet at Scapa Flow.

After the war he served as a peacekeeper in the Black Sea and in 1926 was posted as an instructor to Flinders Naval Depot, near Melbourne. It was on the passenger liner to Australia that he met his future wife.

He transferred to the Royal Australian Navy and after a brief spell in the reserves rejoined as a Chief Petty Officer in 1932.

During World War II he was chief demolition officer for the western half of Australia. It would have been his responsibility to blow up the key strategic harbour of Fremantle, near Perth, if Japan had invaded.

But despite his military record, Mr Choules became a pacifist. He was known to have disagreed with the celebration of Australia's most important war memorial holiday, Anzac Day, and refused to march in the annual commemoration parades.

He took a creative writing course at the age of 80 and recorded his memoirs for his family. They formed the basis of the autobiography, The Last of the Last, which was published in 2009.

Another Briton, Florence Green - who turned 110 in February and was a waitress in the Women's Royal Air Force - is now thought to be the world's last known surviving service member of WWI. An American veteran, Frank Buckles, died earlier this year.


We are about to loose he last thread of contact to this terrible war. The sheer barbaric nature of it at times was beyond comprehension.
This is a chapter in humanhistory that should never be forgotten !!
Posted by The Last Of The Few at 10:57

Aye they don't make them as they used to.