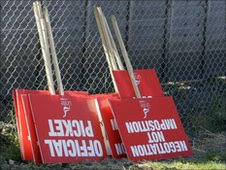 So once again the unions are up in arms about spending cuts.


Now don't say I am not giving space to other opinions but from this quality publication here comes this .......... Delegates to the PCS civil service workers' union today (Wednesday) sent a defiant message to the government by voting almost unanimously to launch a strike ballot.

Only two people voted against. There were loud cheers in the conference centre after the vote was taken.

The union will now ballot 270,000 members, with activists mobilising to win the biggest yes vote on the biggest turn out.

Workers aim to coordinate their strike over pensions, pay, job cuts and in defence of public services with members of education unions on 30 June.

This is set to be a day of rage against the Tories' attacks.

I also listened to the amazing Bob Crow this am. He is leader of the RMT union and his attack on the fact that somebody dared say the trains need a bit of a kick up the arse.
Well Bob take it from me they do .......... I will do everything I can rather than use a train ...... for the simple fact they are shit !!!
Oh and for the record the UK rail network is the most inefficient in Europe and the most costly to run.
It costs £11bn a year to operate and receives £5bn a year from the taxpayer. Yes the same tax payer that also then buys a ticket so in fact is paying twice ........... and you wonder why I wont use the bloody thing!!!

Also be advised that the same Bob Crow despite earning a staggering £130K a year in basic salary also exploits a loophole in the law by living in a housing association property for low income families in North London. Despite his salary he pays a mere £150 a week. Its calculated he has saved some £80k in accommodation costs. Hardly fair on the 5m estimated in
need of housing assistance whilst at the same time he bangs on about the government and its exploitation of the working classes and its protection of the rich ............ errrr which category do you put yourself in Bob ???? ...........see here


I have said this before and I will say it again ............ It doesn’t matter how good you are (or you think you are), how brilliant our supposed public services are in your juvenile, collectivist mindset; There is no money. There is less than no money. In fact the sheer scale of the money we do not have is hilarious. Further, the rate at which we are still losing money is fucking deranged.

Hey, don’t look at me – blame the incompetent revenue pissers who you put in power for 13 years. If they hadn’t inflated your numbers to roughly that of Beijing, we wouldn't have (as much of) a problem now, would we?

I speak from grave experience here myself as in the last 48 hours have witnessed several colleagues having contracts terminated and myself having my salary cut due to market forces .............. I work for a private company so have no union and no strike rights ............. so as you can see your position really impresses me.
Particularly when I see the financial position and knew it was cut or die!

Like they will suffer...........no don't think so!!!
So when you have been on the picket lines freezing your tits off, and you don't have a penny in pocket because you have not been paid........ don't worry 200k and all the company Range Rovers in the world will ensure Derek Simpson, Bob Crow and the other 2 faced fuckers will be right behind you.