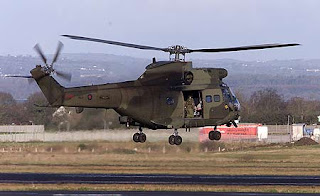 AN unpopular plan to upgrade the RAF’s fleet of Puma helicopters by sending them to the other side of Europe for a £300m refit was ditched in 2009 because Labour MPs feared that carrying out the upgrading and maintenance work in Romania would provoke a “voter backlash”.

Back then the Times reported: “Labour MPs are worried about the reaction of voters amid rising unemployment in Britain.” But under the coalition the decision has been quietly reversed; and the RAF is busily crating up its Pumas at RAF Benson in Oxfordshire and sending them to Eurocopter Romania by, er, road.

The basic maintenance, overhauls, inspections and upgrades will be carried out by Romanian workers at Eurocopter’s factory near Bucharest. Each convoy is made up of “wide load” trucks led by an NCO in a Convoi Exceptionnel warning van, together with an extra truck full of spare parts for the journey. RAF markings are concealed to avoid embarrassment.

Once upgraded, the helicopters will then be crated up again and driven all the way back to RAF Benson. Certification to allow them to fly back to the UK is unavailable because they are not allowed to be flight-tested while in Romania.

Naturally it’s just a coincidence that the order went to Romania while Eurocopter Romania’s parent company, the defence giant EADS, also happens to be building the RAF’s new transport aircraft, the Airbus A400m, which will cost UK taxpayers £2.4bn for just 25 aircraft. That project is beset with problems and EADS needs all the help it can get from its UK defence partners.

PS:
Will any patriotic MP now ask why the RAF also routinely flies its other transport aircraft, Tristars, VC-10s and Globemasters, to France for re-painting?
In fact it’s because the French are less rigorous in enforcing the EU’s COSHH (Control of Substances Hazardous to Health) rules, making it cheaper for the MoD to give jobs to foreign workers than to their British counterparts.