Maybe not the news the bunker needed this am.

Gordy goes on the attack.

First we have this ! 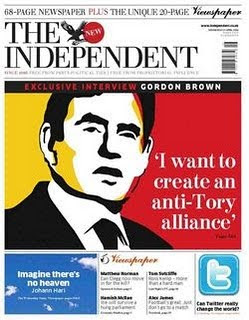 The Independent reports that in an interview with the newspaper, Gordon Brown calls for a "progressive alliance" to keep the Conservatives out of power.

I wonder if making a policy that is the best means of fighting an election?

I mean use that rather than fight on

But say publically lets get together with the Lib Dems and f*** off the blue noses.


The the new saviour of British Politics Nick Clegg gets a sniff of the above and immediately in the Tories most supportive daily rag gives this ...... See Here...


Nick Clegg says 'desperate' Gordon Brown cannot be trusted
Nick Clegg has delivered his most outspoken attack on Gordon Brown, calling him “a desperate politician” as he signalled that he would find it difficult to do a deal with the Prime Minister in a hung parliament.

That will be another call to Nokia HQ for a new handset then !!!!
Posted by The Last Of The Few at 08:55