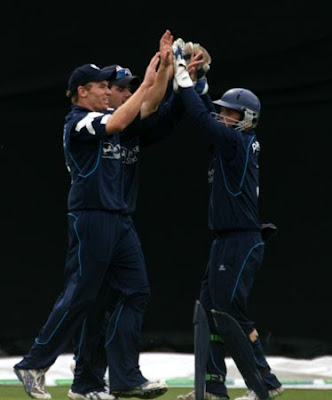 Bloody EU...........A business that has been handed down through five generations is on the verge of being killed off by a decision made by the EU that will have a knock-on effect on world cricket.

Anglian Willow Services, has been producing wood for cricket bats since the late 1700s, but now faces closure following the introduction of a European Directive enforced on the UK in March, which bans use of the insecticide, methyl bromide.

The chemical, which has been banned because of its effect on the environment, is necessary for the treatment of willow before it can be exported to India and made into cricket bats.

The ban threatens the £3m-a-year Essex-based world cricket bat industry, as well as putting the future of the Watling family business in jeopardy.

Val Watling, company secretary for Anglian Willow Services, said: "I am horrified by the whole thing. It's not just going to affect us, it will mean closure for any of the businesses that are involved in the exportation of willow for cricket bats."

Both Anglian Willow Services and JS Wright, of Great Leighs, were lulled by promises that an alternative to methyl bromide treatment would precede the ban - but it did not.

Val's son Geoff Watling, who is a director of the family business, said: "They say a form of heat treatment can be used but that actually splits willow so we are basically left with nothing.

"The Indian Government cannot allow our willow to be imported without a treatment certificate. On that basis I give our industry 12 weeks to survive.

"We alone have 1,400 prepared trees ready to go and Wrights, who are responsible for up to 80 per cent of the UK supply, have 20 times that amount.

"The current rules of cricket demand bats are made of willow. Without quality East Anglian willow the worldwide game supply of test standard and 20-20 bats could dry up within two years."

Mark Orley, secretary for Willingale Cricket Club, has spoken out in support of the company.

He said: "Most of us are aware that a lot of the world's wood for cricket bats comes from Essex and it will be sad to lose any company that plays a part in the manufacture of cricket equipment."

A spokesman for the Department for Rural Affairs added: "Under the Montreal Protocol, methyl bromide was banned from 2005 in the developed world, except for quarantine and pre-shipment (QPS) and critical uses.

Notice I included a photo of the SCOTTISH Cricket team who play at the fabulous Grange at the bottom of Arthurs Seat.