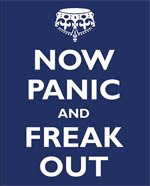 Despite the fact that he died around 620 BC, Draco the Lawgiver must be spinning with excitement in his grave.

We have witnessed some horrific scenes over the last few days. Acts of violence and theft committed by pure scum. There is no nobility in their actions. There is no honour. There was no need for this scandalous criminality.

I doubt that I can add any more words to a story that will play out over the next days, weeks and months.

What I would like to do though, is ask normally level-headed people to chill out. If I had a quid for every time I saw words like this, I would be a wealthy man:

And so on and so forth.

We pay billions of £££'s every year to ensure that police officers have the very best protective equipment, and that they receive the very best training for exactly this kind of civil disturbance. On this very blog we have looked at the police, live and in full colour, beating the bejesus out of protesters. Last night though, instead of kettling and righteous clubbing from the cops, I saw this: 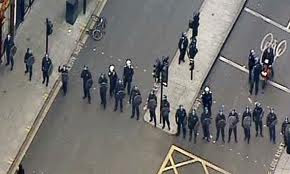 These boys in blue were happy to kettle young students, anti-war protesters, and other "soft" groups. But when it came to violent thugs, they stood by, claiming that "there are not enough of us". (Bear that in mind for what comes later.)

Send the army in? It is a very tiny mind that comes to that conclusion. The police have not yet fully deployed and they have not yet exhausted all methods of crowd control at their disposal. CS gas has not been used. Snatch Teams (to my knowledge) have not been used. Tasers have not been used. For legal reasons water cannon can not be used. So it is far too early to even think about deploying troops. Besides which, it is not their job. They should never be asked to control riots. Never. If you want to see how badly it can go wrong when squaddies are deployed, look south to Tunisia and Libya, look east to Syria and Bahrain. It goes pear-shaped very, very quickly. I am stunned that some empty-heads were screeching for martial law. FFS!

Enough of this. I'm reasonably sure you have read similar elsewhere.

I think we learnt at least two lessons from all this:

1. We are about to lose some liberties.
2. It doesn't take much to take over the streets.

That thin blue line is anorexic. My timing may well be all the way off, but the last few days have demonstrated much better than my words ever have that we are many and they are few. Imagine, if you can, just 500 people in every town and major city demanding full restoration of those rights which the government willingly (and unlawfully) gave away to Europe? Peaceful action by a significant number of people would ensure a complete takeover of the country in a matter of hours or days. Remember this the next time you try to convince yourself that we cannot bring about change if we were determined to.

Just in case you conclude that I am having a pop at the cops: I am not. I actually think they should have gone in hard, faster. With violent thieves, and they are no more or less than that, a spanking is all they understand. A solid teak baton around the napper would have stopped dozens of them cold. And when their cohorts see the claret fly, it concentrates the mind. This is probably the first and last time you will see me condone tough action from the police. The rioters broke my only law: do no harm. I would expect exactly the same harsh treatment if it was me doing the violence and the thieving.

We have been rewarding our thugs for 20 years. Warm, comfy cells, complete with PS3's, laptops and High Def tellies. When they are released, after serving a fraction of their sentence, we send them on their way with a hug. I believe, firmly, that most of this was Labour's doing. I just hope someone tells them that, repeatedly.

No martial law, no troops on the streets, no hanging. Got that?

I refuse to hand over any more of my liberties because a couple of hundred light-fingered bastards couldn't control themselves.

Punish those half-wits by all means.

But leave me the fuck alone.

You already stole too many of my rights. I want them back.


Stolen without shame and with a hat tip to the Capt here!!
Posted by The Last Of The Few at 17:36

Glad you liked it!

The big, unanswered question remains: why did the police stand by and do nothing? The inaction was in direct contravention of the Oath every police officer takes.