News of the World !! 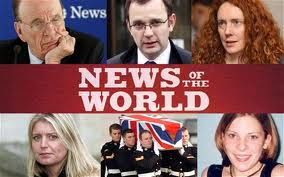 The sordid tale of the loss of 168 years of newspaper history.
Once branded a world leader.
A bastion of reporting!

There are many many more accomplished bloggers out there who will write at length and far more lucid than my wee "pile O pish" here.

Scotland Yard detectives are to reveal why their first News of the World investigation failed, if the Government pays them a large sum of cash in used notes.

Metropolitan Police chief David Watterson made the pledge today as David Cameron launched an independent inquiry into the News of the World phone hacking scandal.

Cameron has vowed to leave no stone unturned in the pursuit of truth and has demanded “why did the first police investigation fail so abysmally?”

Chief Superintendent Watterson told The News Grind today: “There is absolutely no need to have this independent inquiry into the News of the World. I have a crack team of officers more than happy to reveal what’s going on … if the price is right.

“Brown envelope, £2,500, leave it behind the fourth bin at the back of Scotland Yard. Bung in a monkey and we’ll pull Andy Coulson over for speeding. How does that sound?”

A spokesman for the Prime Minister said he was appalled at the comments made by the Scotland Yard chief.

“It is absolutely disgusting,” the Downing Street spokesman said, “For a monkey we’d expect Coulson to be fitted up on trumped up drugs charges at the very least.”

Yes that bit is tongue in cheek on an otherwise "vile taste in the mouth" story.


However ask yourself the question why

Why would and I admit it has finally to be proven in a court of law .......... Why would someone or an institution go to these lengths? To weave a web so vile that it ends up in a clusterfuck of this magnitude!!?

Simple it is because of US.

Our dirty little obsession with all things salacious and filthy. We love hurt misery and pain. And if we can get our hands on it we thrive on it. As a nation we just crave it like an addict craves smack. How on earth can we have so many publication surviving without someone buying copies of them all the time.

Without this need perhaps a news group may not have needed to go quite this far in order to have that bit more of edge .......... to have "THE SCOOP".

So let the law deal with Brookes, Coulson, Cameron, Blair and whom ever else has made an error of judgement and been party to this sordid mess...........
Let the law deal with the supposed up holders of the law in the Metroplitain police, and the bung takers who put on said uniform...........

But also let the public take a look also at itself and perhaps, just perhaps you might want to change your attitude to life and others, and think again about your constant need to fuel your appetite for everyone elses misery .............