So Why Did Brooks Resign ?? 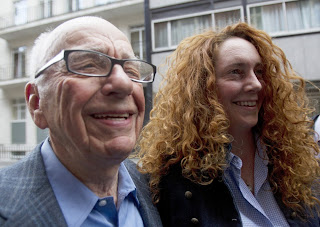 So for some reason Rebekah Brooks has thrown in towel and tended her resignation from News International.

It was inevitable I guess considering the revelations not coming out.

Indeed the level of revelations etc are so stark I am beyond any belief that the lady in question had no knowledge of any shenanigans at all.

I mean even if she did have no knowledge, then she was certainly no fit person to be chief exec as to be that slack you have no knowledge of that kind of operation and indeed your company can give 130K in bungs (allegedly) to the Metropolitan Police, and you do not know about that, mean you are culpable in my book.

Anyway back on track ........... The investigation and indeed the course of the revelations grows more. Ms Brooks now finds herself in the mire. The Murdochs felt they could shield her but indeed the arrest of Coulson previously and yesterday the arrest Coulsons NotW deputy starts to heap the pressure on Brooks that she actually did know something.

Even Sir Paul Stevens the Met Plods chief is under the spotlight for his performance and that of his team (notice my wording there).

However when you have these 2 people this am make statements such as this .....

Firstly ...... Rupert Murdoch's daughter Elisabeth has made a “furious” attack on Rebekah Brooks’s handling of the phone hacking scandal at News International. Miss Murdoch, who is set to be given a seat on the board of her father’s News Corp empire, told friends that Mrs Brooks had “f----- the company”.

Secondly ...... Speaking on BBC Newsnight, Prince Al-Waleed bin Talal Al Saud, News Corp's second largest shareholder, said Mrs Brooks should resign if there was any indication that she knew about the phone hacking taking place at the News of the World. He said: "I will not accept to deal with a company that has a lady or a man that has any sliver of doubts on her or his integrity."

So it appears that cracks are starting to appear now in the NI facade.

IMHO Brooks knows everything. The Murdochs attempts to shield her are intentional because she knows were the bodies are buried. Coulson, the deputy and now the Met Chief will all cough up to save their skins and their guilt edge pensions.

What we do not know however is what the deal is behind the scenes for Brooks to walk away, face the music, do the time and no doubt keep her big gob shut.


Mind you I have an idea! Her ex hubby Ross Kemp, apart from laughing his arse off this morning, can now go and do one of those famous award winning series he does ...... you know "Worlds toughest Gangs" etc.

Wonder what you could call that series? "Worlds most dishonest ex wives"!!!!!!!
Posted by The Last Of The Few at 10:44