Silvio Berlusconi to be neutered 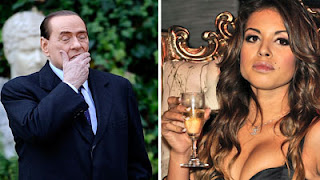 So it was only a matter of time I suppose.

And now............The hords of screaming protesting loverrrrrly Italian ladies..........have assisted in bring Italian Premier and Billionaire Silvio Berlusconi before the courts. On Sunday as many as a million women marched through numerous Italian cities calling for him to step down.

The Italian Prime Minster has been ordered to stand trial on charges of having sex with an underage prostitute and abuse of power.
Prosecutors allege Berlusconi paid for sex with belly dancer 'Ruby Rubacuori'
The indictment sheet, issued by a judge in Milan, states the fast track trial will start on the 6th of April.
It is understood Mr Berlusconi will appear before three female judges, which some legal analysts say could be a disadvantage.
If convicted he could be handed a lengthy prison sentence.

However it has emerged that Italy’s Prime Minister Silvio Berlusconi is to be taken to a vet to have his testes removed, the Italian government has confirmed.

‘He has become unmanageable,’ said President Giorgio Napolitano. ‘He goes out every night and is obviously getting up to all sorts, often with some very young kittens. Even during the day he’s either rubbing himself up against you or spraying up the curtains. We clearly can’t get rid of him, so the only remaining course of action is to have him fixed.’

The decision has been made following a number of increasingly embarrassing incidents involving Mr Berlusconi. ‘We can’t take him anywhere,’ said one official. ‘Last week we had to physically restrain him at an international summit when he wouldn’t stop trying to dry hump Angela Merkel’s leg.’

The troublesome Prime Minister will be neutered sometime this week, although capturing the randy 74 year-old is proving to be far from easy. ‘We are still trying to get him inside the special wicker cage, or Berlusconi basket,’ explained the head of Italy’s Neuter Squad, Detective Aurelio Zen. ‘We left the basket in his office but so far he just looks at it suspiciously. It’s almost as if he knows.’

It is hoped that Mr Berlusconi will eventually be tempted into the basket by a trail of little treats including razzle mags, the smell of prostitutes and an invitation to a bunga bunga party. Once Mr Berlusconi is captured he will be driven to the vet and placed under anaesthetic before having his testicles removed.

‘He might be a bit bad tempered for the first few days after the operation,’ explained vet, Vitto Vettriano, ‘but it won’t be long before he settles down to a more sedate lifestyle. He might even sit on your lap, although purely in the platonic sense.’

For many Italians, though, the neutering of their Prime Minister will not be before time. ‘Quite honestly we should have had him done years ago,’ admitted President Napolitano. ‘It would have saved everyone a lot of trouble. I only hope that Mr Berlusconi can find the same level of satisfaction from playing with a ball of wool.’
Posted by The Last Of The Few at 16:39