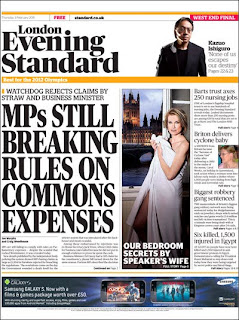 So Sally The Alley ( a name derived from her some what "very friendly" nature as a student)............The wife of the Speaker claims she has been "done up like a kipper" after appearing in a newspaper dressed only in a sheet and describing her husband, John Bercow, as a sex symbol.

"I never realised how sexy I would find living under Big Ben with the bells chiming."

She continued: "Politicians as a breed aren't particularly sexy but I think politics can be sexy because power is an aphrodisiac.

"Since John became Speaker, the number of women who hit on him has gone up dramatically. I don't get jealous because more men have hit on me, too."

But she has now taken to Twitter to say she was "done up like a kipper. Mr B [Mr Bercow] is going to go potty". 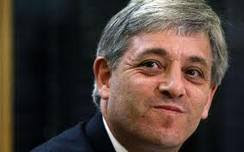 
Sally my dear..............your hubby is universally hated in Westminster. Particularly by the Tories.

Reports have him swanning around like bloody royalty pissing everyone off.
Also we best not forget with huge amount of public cash you and the "sex god" took from our purse in order to fund the palatial apartment in which you live.

And you thought a sultry photo (and trust me its not) of you in a towel inside the apartment I pay for was a good idea.

We love you have really helped his cause have you not??


UPDATE UPDATE:- I am incorrect with my assumption that pic was taken in the Speakers grace and favour home.........in fact That photo of Sally was taken in a hotel room opposite the Palace of Westminster.

So she claims she was done up like a kipper eh! 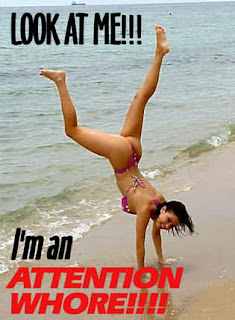 UPDATE 2 UPDATE 2:- And she goes on to say "I think it's hilarious that I have been referred to as the Carla Bruni of British politics."

BWAHAHAHAHAHAHAHAHHAHAHA...............trust me honey no you have not..........a knee trembler over a wheely bin does not put you in the same class as Carla Bruni............unless of course its because you both married short arsed twats with gargantuous egos!
Posted by The Last Of The Few at 16:55

muhammadrazzaq said...
This comment has been removed by a blog administrator.
4 February 2011 at 02:28