I have not blogged for a wee while.
Of late my private life has been forced to the fore and I have had a miriad of issues to deal with sadly.

But at last the light at the end of the tunnel is starting to be seen and hopefully normal service will be resumed soon.

However as the cuts from the coalition start to bite and the truth of them starts to be seen I am starting to find myself becoming angered and pained.

Indeed the deficit we currently hold thats to the financial ineptitude of Brown, Blair and Balls is IMHO worthy of a trip into court, the actions of the Coalition in certain areas is beyond belief.

I am of the opinion certain areas of the cuts are being done in order for the coalition to "suck up" to the Europhiles and indeed despite "Call me Dave's" retoric his agenda is becoming clearer. 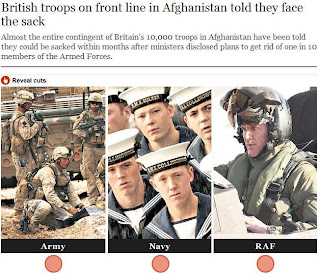 These deep cuts in manpower go way beyond saving money. If we were that desperate – and we are – we could cut foreign aid, we could cut the EU "contribution", we could clamp down really hard on benefit tourism, and much, much more.

All that would more than make up for the cost of keeping our minimal armed forces together. What you don't do is take out irreplaceable core capabilities, not even as a very last resort.

But that isn't what it's about. We are seeing here structural cuts which remove that UK's ability to act independently as a nation, and to project our foreign policy. We have moved from independence to a transitional stage where our capabilities have been removed and there is no replacement.

This is easy to see:-

With the arrival of the Lisbon Treaty certain Military Clauses came into effect.

The Treaty of Lisbon also states that:

Soon – as has has been hinted - the real agenda will increasingly emerge: "We will be moving into an era of sharing capabilities with our European allies. The days of being able to do everything are long gone."

On 20 February 2009 the European Parliament voted in favour of the creation of Synchronized Armed Forces Europe (SAFE) as a first step towards a true European military force.

Basically the errosion of the UK military and the arrival of The Synchronized Armed Forces Europe (SAFE). This is a concept for an ever closer synchronization of the European forces under the Common Security and Defence Policy.


Our nation is standing blindfold at the edge of an open grave, its hands bound with a pistol at its head called European integration. Yet, even as our ruling classes seek to destroy the last vestiges British independence, the media slumbers on, never mentioning that elephant in the room.

Good to see you back and on form.

The EU defence force is being created to protect the EU from the people who live upon the continent of Europe!