The Kidnapping of Paul and Rachel Chandler 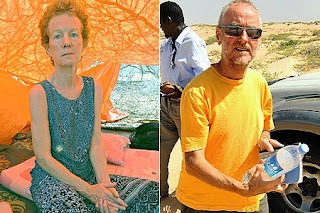 Saturday the 23rd October marked the one-year anniversary of the kidnapping, which made headlines around the world. The retired couple, on a pleasure cruise, had just left the Seychelles islands in their yacht and was sailing toward Tanzania, when they were captured by a Somali pirate group on the prowl in the Indian Ocean.

Fearing a possible rescue attempt, the pirates kept the Chandlers on shore and in separate locations for months. But recent reports say the couple is now being held together because the pirates are no longer willing to pay the cost of keeping them apart.

(Please keep in mind on 2 occasions the Marines and SBS were stood down from a "Ready State" when the Chandlers were in a position of a rescue attempt being made by the previous government, the troops were on station armed and ready. Also be advise they were British so a Linda Norgrove incident would not have happened, also keep in mind these are Somali pirates).

It is believed the Chandlers are currently being held in or near the town of Adado, close to the Ethiopian border, in central Somalia. It is also the area, where a security consultant for British charity Save the Children was kidnapped on Oct. 15th.

The consultant was released five days later. Save the Children credited local clan elders for securing the release, and denied reports that a ransom of $100,000 had been paid to the kidnappers.

Media reports had recently expressed fear that the couple could become pawns in a conflict between their pirate captors and al-Qaida-linked al-Shabab militants trying to expand their control in the area.

A ransom of nearly $500,000, collected by friends and family of the Chandlers, was delivered to the pirates. But the exchange failed when, after the money was dropped-off, the pirates increased the ransom demand to $1 million for the couple.

In an interview with a local radio station in Somalia, a spokesman for the pirate group, identified only as "Qodar," insisted the Chandlers would never be allowed to go free unless the group's ransom demand is met IN FULL.

Qodar says Paul and Rachel Chandler were well-treated for the first six months of their captivity, but their living conditions have deteriorated since. He says a ransom should be paid immediately to prevent the elderly couple from dying of neglect in Somalia.

The pirate group's statement appeared to be in response to a pledge made last week by Somalia's Transitional Federal Government to seek new negotiation channels, including contacts with clan and community leaders, for the Chandler's release. The government condemned the pirate hostage-takers, saying their actions have brought "terrible shame" to the nation.

The British Government refuse to negotiate!!!

Its about time this issue was closed.
Call me Dave needs to step up to the plate. Get the troops deployed to a safe area. Ethiopia wont say jack shit for fear of a rake of aid drying up.
Half a dozen drones to pinpoint position, Couple sat sweeps to verify.
The BOOM in and out in under 6 mins.

Sounds easy I know, but these boys know their onions.

This is a strange affair. I remember, shortly after the kidnap happened, reading that the Chandlers had been offered the opportunity to join a group of small boats, like theirs, to travel these waters, but they refused. Seemingly there's safety in numbers. The writer said he had explained the dangers of the waters to them but they insisted they were good enough sailors and could handle any problems.

Now, I'm not saying the above because I've no sympathy for them, but it did make me wonder why they refused to join with other sailors.

Can't help but agree with your comment about Dave though.

I remeber the "safety in numbers thing as well"

I found it odd they did not do that.
However half a dozen 100K yachts with sailors of a certain age is not match for a dozen AK47s.

The pirates take tankers as well so a few yachts are not a deterant.

However a year is too long
.
The half a million ransom being upped is just not "how we do things in Britain"

No doubt Dave sent a strongly worded email to the Somali Government.

Gets the boys in get the Chandlers out.

There is apparently a side to this matter which has been kept hidden from us in the EU dictatorship. The Somalis are are dying of diseases from contaminated hospital waste allegedly sent for disposal but really just tipped into their coastal. EU factory ships have scooped all their fish and ruined their economy. If this is the case, sending the boys in isn't the answer, and the Somalis feeble attempt to get some cash from their tormentors is understandable.
See below for full details
http://keyboredwarrior.blogspot.com/2010/10/hidden-truth-of-somalian-piracy.html

Thank you for the inf

I always say there are 2 sides to a story.

However I feel its gone on too long and clearly the Somali idea that holdingh the Chandlers as per the news story you quote is folly.

The Germans, the French and The USA have all met Somali Pirates with force. Only UK citizens remain in Somali hands.

And a good point it is. But... I have a friend in the RN and I asked him why they didn't sink the bastards. His reply was that the Somalis had acted in a gentlemanly fashion with regards to hostages (although admittedly this conversation took place a year ago approx.) It seems a bit unfair to steal a man's livelihood and give him diseases and then shoot him dead for trying to get some of HIS money back from his enemy (the EU governments) in the only way he can. But yes, we need to get these people back from captivity, and yes, it looks like we'll have to put the boot in to do it, presumably at more expense in cash and lives than just paying a ransom. Not good, but perhaps inevitable. What a mess.