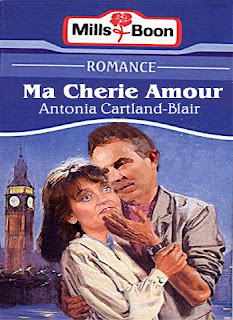 The story so far: In the middle of the night, our hero Antonio has fled from the malevolent grip of the brooding Baron Brown. After several hours of wandering around Islington, he espies a lit window in a much more tasteful mansion, filled with elegant soft furnishings, healing crystals and scented candles. He has found solace with his childhood sweetheart, Cherie.

The rain set early in tonight. The sullen wind was soon awake. The tree-tops tried their utmost to resist the elements, as I, too, tried in vain to resist the attractions of the raven-haired temptress draped by the glowing embers of the log fire, an antique glass of even more antique whiskey – a gift from Signorio Sergio Bersculonio – in her beautifully manicured hand.

The heady scent of burning applewood, the rich amber tones of the spirit, the deliciously seductive fragrance of Tramp by Lentheric affected my senses. I threw caution to the winds and myself at my beloved’s feet.

She cradled me in her arms and soothed me; told me what I needed to be told; strengthened me; made me feel that what I was about to do was right… And that the rug could be dry-cleaned anyway.

On that night of the 12th May, 1994, I needed that love Cherie gave me, selfishly. In that I was selfish, not she – my syntax is unclear. She, as softly plump as a silk, goose-feather-stuffed counterpane; she, raking those manicured talons across my back like a snake with fingers; she, giving me her utmost attention whilst simultaneously checking the property ads for Bristol …

O! O! O! I devoured it to give me strength, I was an animal – a panda, a tiger, a horned rhinoceros – following my instinct, knowing I would need every fibre of emotional power and resilience to cope with what lay ahead. I was exhilarated, afraid and determined in roughly equal quantities as I kissed her roughly – as in approximately rather than without due care and consideration as it was dark and not easy to find (just like those pesky weapons of mass destruction) – on her swollen lips and took her roughly – as in approximately as well as without due care and attention – on the Axminster rug.

“Was that it?” she murmured in slightly petulant tones as she reached for my vest.

I was restored, victorious, ready to face my vicious Scottish foe, my arch enemy, my nemesis, the man with the emotional intelligence of an amoeba. Ma Cherie amour! I am a man once more.

TO BE CONTINUED
Posted by The Last Of The Few at 17:12

I wish I'd thought of that.