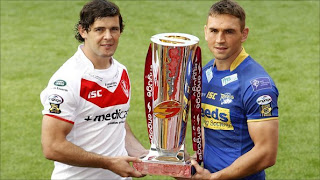 Tomorrow, Saturday 8th October sees the now famous Superleague Grand Final. The pinacle of the 13 a side code.

But there is a twist as a season dominated by Warrington and Wigan ends in familiar fashion.

Old rivals and multiple Grand Final winners St Helens and Leeds will meet at Old Trafford to decide who takes the year's top prize, having come through the play-offs from the unprecedented lows of third and fifth place in the table.

This will be the first Grand Final not involving either of the teams finishing first and second in the regular season, yet it reunites the two most successful clubs in the Super League era. What does that say about the competition? And why have the year's two outstanding clubs failed to reach the ultimate showcase?

The Grand Final as a one-off event is unrivalled in terms of theatre. Having an entire season decided over 80 minutes may not be seen as fair, but it creates an atmosphere I have never experienced elsewhere in sport.


An match bursting with expectation, adrenalin and fear prduce an unmissable spectacle.


Should we be surprised therefore that the two clubs to have proved their ability to perform on the biggest stage are again there at the death? Leeds and St Helens, with four Grand Final wins apiece, have experience, bottle and ability to perform under the most extreme pressure.

I am a proper grade A hardcore Leeds fan. Despite being a Scot I spent my formative years in Leeds watching the greats of many a year ago however my joy at seeing Leeds make this grand final is tempered with an acknowledgement that seeing both Warrington and Wigan fall away was most unexpected.

So what happened to them? Regardless of Wigan's assertions to the contrary, they were not the same side after their Challenge Cup success, a game that again Leeds to them to the wire on. With such a huge triumph comes a release, and Michael Maguire's side never fully rediscovered their early-season intensity.

Warrington spent much of the season walloping opponents. My view is that they may have been victims of their own success. Tony Smith's league leaders were so comfortable, so often, that when they were finally given a contest by Leeds last week they were out-hungered. Wolves centre Ryan Atkins - a Leeds boy - said afterwards that the Rhinos wanted it more than Warrington.

And then there is the 'M' word. Momentum is a massive reason that Leeds and St Helens have made it again. Saints were always fancied to explode into the play-offs given their end-of-season form. However as good as Saints have been Leeds have screamed post the challenge cup in near perfect form, and as we all know once the Rhinos hit their straps you could sense the men from Headingley could well taste success.

Christ Lad, I take one day off of blogging and you're over here lighting the place up. Leeds huh? I'll remember that :)