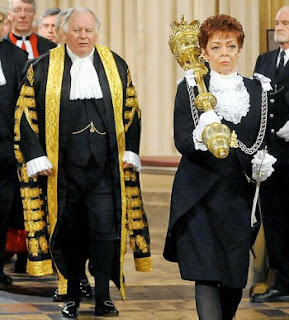 In Westminster there are increasing rumours about why the Sergeant-At-Arms, Jill Pay, has announced her intention to retire. Its hard to say what took place behind the scenes but the departure does bring to a close a disastrous chapter in Parliamentary History.

I suppose that Jill Pay had it hard from the outset, she was the first woman Sergeant and one of the only holders of the post to have not been in the military. She always found it difficult to shake off her 'token gesture' image. But during the Damian Green Affair she showed herself up to be a weak figure struggling to understand her own role.

Just for the record its worth reminding ourselves what happened to Damian Green. Gordon Brown was becoming exacerbated by the number of leaks from the Home Office and demanded the Police take action. As part of this action the Police searched Damian Greens office and arrested him.

There was no doubt that this violated an ancient tradition dating back to Charles I and also an annual pledge made by the Monarch on the day of the State Open of Parliament.

The Police themselves were nervous about violating the Palace of Westminster and sought permission from the Speaker (Michael Martin) and the Sergeant: both agreed to the raid.

In times gone by both the Speaker and the Sergeant would probably have lost their heads for being complicit in such a denigration of Parliament. Today we can do little except lament the way that a once great institution was employing as its Head of Security a person who wasn't entirely familiar with the British Constitution or indeed her own role in it. But Jill Pay is a symbol of a much wider rot at the heart of our political system.

A once great institution in Westminster had descended into little more than a club house for desperate talentless freeloaders. Who cared more about their next expenses cheque than they ever did about their constituents.

At the same time we are faced by an increasingly powerful executive whose disregard for Parliament was such that they dared to demand the arrest of an MP. Jill Pays mistakes are widely documented - security checks that stifle the good running of Parliament yet cannot even prevent an amateur smuggling a custard pie into the Murdoch meeting - but lets not forget that all of us have been guilty of denigrating Parliament.

For anyone who laughed at the failures, ignored the expenses or put political correctness before security and constitutionality, let Jill Pay be a symbol of our failure. And her replacement a symbol of a new start.

We cannot continue to have a country with a strong executive and no legislature.

Good God, I'd never insult you or Scotland. It's for my twitterfriends. That and I hate the French. I'm killin' 2 birds with one stone.

i worked for the sgt at arms department. it was a good thing for someone other than jennings a nasty piece of work .however pay would not listen to advice,became more grand than the queen who was right to not meet her and whos only concern was blind ambition by walking over others. with a splendid apartment in whithall rent free.courtesy of taxpayer.