So it is that this morning I awoke to the dulcet tones of a news broadcast of the wireless ............ well rather nice DAB to be exact but a broadcast non the less to hear a tirade from a certain Mark Serwotka.

Mr Serwotka is the leader of the PCS union.
The PCs union is the union of civil servants.

However this am Mark was waxing lyrical about how hundreds of thousands of public sector workers are poised to go on strike in protest at pay freezes and pension changes.

Indeed desperate times Mark I agree, but don't you think maybe you are being a little bit of a hypocrite here.

But first I must digress .......... Now the reason for this Mark is so we can really see a little about who you are and your motives. 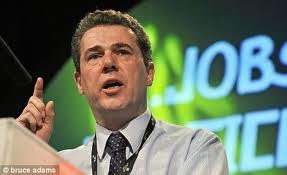 Hugh Lanning of the Membership First faction and the incumbent Barry Reamsbottom of the National Moderate Group.

However, Reamsbottom did not secure the fifty branch nominations needed to appear on the ballot paper. Serwotka then beat Lanning with 41,000 to 33,000 votes.

Following Serwotka's election, Reamsbottom refused to step down when his term of office expired, citing what he claimed were legal irregularities in the election process.

The dispute was taken to the High Court where Serwotka won and subsequently assumed office.

In December 2009, Serwotka was re-elected for a five-year term, gaining 37,866 votes against Rob Bryson's 21,883.
So it is fair to say that Marks appointment is somewhat shadowed in errr mystery. Yes that's a good word.

WOW..........Really so not only was the appointment eeerrr Mysterious as I said but perhaps Mark was also somewhat eeerrrr mysterious with his pledge over his salary in his campaign and what he actually received .......... hhmmmm !!!

Mark I understand you position ........... I feel for you with your membership each paying you their £3.00 per week demanding that you ride in your big white horse and tell the nasty government that it wont happen, and that you wont allow it ........ BUT ...... lets be honest its the private sector that will drive the economy. Its the businesses etc that will make the revenue to pay the taxes that allow the bloated public service to survive. Perhaps you should maybe, just maybe think about supporting them and helping to ensure they can go forward and have a future, employ more people, make some money and help secure a recovery, instead of flapping you quite simply lying mouth a proven by your election in a vain effort to extract more union subs from your already beleaguered membership.

However an £82 grand basic sure helps ensure you wont be feeling the pain they do eh!!!

.......I have said this before and I will say it again ............ It doesn’t matter how good you are (or you think you are), how brilliant our supposed public services are in your juvenile, collectivist mindset; There is no money. There is less than no money. In fact the sheer scale of the money we do not have is hilarious. Further, the rate at which we are still losing money is fucking deranged.

Hey, don’t look at me – blame the incompetent revenue pissers who you put in power for 13 years. If they hadn’t inflated your numbers to roughly that of Beijing, we wouldn't have (as much of) a problem now, would we?

I speak from grave experience here myself as in the last 48 hours have witnessed several colleagues having contracts terminated and myself having my salary cut due to market forces .............. I work for a private company so have no union and no strike rights ............. so as you can see your position really impresses me.
Particularly when I see the financial position and knew it was cut or die!

Like they will suffer...........no don't think so!!!
So when you have been on the picket lines freezing your tits off, and you don't have a penny in pocket because you have not been paid........ don't worry 200k and all the company Range Rovers in the world will ensure Derek Simpson, Bob Crow, the lovely Mark and the other 2 faced fuckers will be right behind you.

perhaps when quoting Mr Serwotka's salary you should research your facts. the members of PCS decide his salary not Serwotka himself, as a result of this he had to donate a substantial amount of his salary back.

Check yours as indeed that was a falsehood.

It was a voluntary deal by himself as a result of pressure applied from his election pleadge and only amounted to £1000.00 a month.

Yep that really generaous from a salary that size.

I notice you dont comment on the court case.

It also is good you hide behind anon name.

Also be proud of a 20% turn out for the vote of all PCS union memeber resulting in an approx 13% of total memebership strike vote. There is democrasy for ya eh!

And just try and complain.

music to my ears mark..i was thinking about his salary as he was banging on
on question time but that question of salary never comes up when they interview union leaders!!!!!!!
dimbleby...shame on you

What has Mark Sewotka's leadership and those before him achieved for the public sector...nothing worth shouting about. They give the members false hope, making out like they care about the individuals future, but do they really care? Nope. They will eventually accept what the Government is implementing or they will get a better deal which will make bugger all difference over the piece, much like the pay negotiations a few years back...people lost a days pay for what?

I work for HMRC...I can't argue with the pension cuts. Anyone who has an issue should leave and go work elsewhere; it ain't a charity and it isn't a right...by the way there is no such thing as a right.

Why not be sensible if you wish to stay in the Civil Service..get a private pension. Oh that's right people these days like the silver spoon treatment don't they. They can't be bothered sorting it out themselves.

Sewotka..your a tit and so are those who are PCS enthusiasts. But credit where it's due...you done not bad for yourself.

And by the way trade unions are the authors of their own demise. Arguing over the petty things, agitation every time HMRC try to improve on it's performance. You promote laziness which in the long run has made HMRC an easy target for cuts.

You can't deny it really.