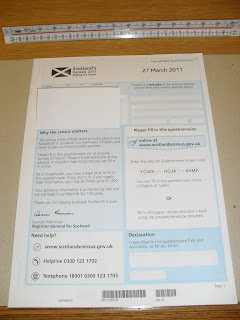 My wee rant about the census and my well "Not bloody filling it in" thing.

Oh also for the record I have never had any comms from anyone with regards to not completing it.

Not a peep no.


I am aware someone came to visit but I was not in so sadly missed the chance for a bit of sport.


Well anyway in today's Telegraph we discover THIS BELTING bit of info.

The entire 2011 census database has been stolen by hackers and will be published online.


Ryan Cleary, an alleged member of the hacking group behind the claim, LulzSec, was arrested in Essex this morning by specialist cyber crime officers from Scotland Yard.

The 19-year-old was taken to a central London police station and remains in custody on suspicion of Computer Misuse Act and Fraud Act offences.

A “significant amount of material” was also seized from an address in Wickford, Essex.

The “pre-planned intelligence-led operation” in collaboration with the FBI followed claims online that the 2011 census database had been stolen and would be published in full.

“We have blissfully obtained records of every single citizen who gave their records to the security-illiterate UK government for the 2011 census,” a posting purportedly by LulzSec said.


Well I never. I am shocked. Never in a million years did I think anyone would attempt to go and steal millions of people private info, history, life and living info, kids history, schools, dates of birth, sexual preferences, education histories, car info, religions info or who ever you where banging on the night of the 27th February 2011.

I must say how grateful I am to the FBI for the help they have given as the info was in the hands of a US defence contractor for storage and processing.


So a quick note to those who cocked a snoop at me, to those who said "I was being stupid and taking a ridiculous stand"

I am an American man, and I have decided to boycott American women. In a nutshell, American women are the most likely to cheat on you, to divorce you, to get fat, to steal half of your money in the divorce courts, don’t know how to cook or clean, don’t want to have children, etc. Therefore, what intelligent man would want to get involved with American women?

American women are generally immature, selfish, extremely arrogant and self-centered, mentally unstable, irresponsible, and highly unchaste. The behavior of most American women is utterly disgusting, to say the least.