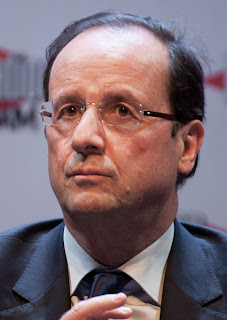 So on Sunday just past 06/05/12 the lovely people of France voted and as we all know The current President of the Republic being Nicolas Sarkozy, a position held since 16May 2007, with a result of a loss for him giving the President-Elect to François Hollande, who takes office on 15 May 2012.

"France has neither winter nor summer nor morals. Apart from these drawbacks it is a fine country" --Mark Twain

"France has usually been governed by prostitutes" --Mark Twain

"I would rather have a German division in front of me than a French one behind me" --General George S. Patton

"Going to war without France is like going deer hunting without your accordion" --Secretary of Defense, Donald Rumsfeld

"We can stand here like the French, or we can do something about it" --Marge Simpson

"As far as France is concerned, you're right" --Rush Limbaugh

"The French are a smallish, monkey-looking bunch and not dressed any better, on average, than the citizens of Baltimore. True, you can sit outside in Paris and drink little cups of coffee, but why this is more stylish than sitting inside and drinking large glasses of whisky I don't know" --PJ O'Rourke

"You know, the French remind me a little bit of an aging actress of the 1940s who was still trying to dine out on her looks but doesn't have the face for it" --John McCain

"You know why the French don't want to bomb Saddam Hussein? Because he hates America, he loves mistresses and wears a beret. He is French, people" --Conan O'Brien

"The favourite bumper sticker in Washington D.C. right now is one that says 'First Iraq, then France'" --Tom Brokaw

"What do you expect from a culture and a nation that exerted more of its national will fighting against Disney World and Big Macs than the Nazis?" --Dennis Miller.

"They've taken their own precautions against al-Qaida. To prepare for an attack, each Frenchman is urged to keep duct tape, a white flag, and a three-day supply of mistresses in the house"--Argus Hamilton

"Somebody was telling me about the French Army rifle that was being advertised on eBay the other day. The description was 'Never shot. Dropped once" --Rep. Roy Blunt (MO)

"Do you know how many Frenchmen it takes to defend Paris? It's not known, it's never been tried" --Rep. R. Blount

"Do you know it only took Germany three days to conquer France in WWII? And that's because it was raining" --John Xereas