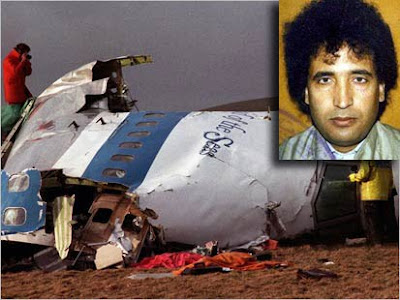 East Renfrewshire Council, which is supposed to receive updates about his condition following his early release from prison, has said it has received no official confirmation of his death but it is investigating.

The Foreign Office said it does not know if the reports are accurate, but they are "seeking further information".

A Scottish court in 2001 convicted Megrahi, 60, of the 1988 attack on Pan Am flight 103, but he was freed on compassionate grounds in 2009 because doctors said he was battling prostate cancer and had only three months to live.

He was greeted like a hero by the Gaddafi regime on his return to the country in 2009having served eight years of a 27-year sentence.

He was the only person convicted of the bombing of Pan Am Flight 103 over Lockerbie.

To the end, Abdelbaset al Megrahi always insisted he was an innocent man and had nothing to do with the attack, which killed 270 people, most of them American students flying home for Christmas.

Born in Tripoli in 1952 and educated in the United States and the UK, the former Libyan intelligence officer was added to the FBI's 10 most wanted fugitives list seven years after the atrocity.

He did not fit the stereotype of an international terrorist.

Smartly dressed and quietly spoken, he portrayed himself as a family man who had been the victim of a terrible miscarriage of justice.

After almost seven months and evidence from 230 witnesses, Megrahi was eventually found guilty and sentenced to 27 years.

A director of Libya's Centre for Strategic Studies and later put in charge of Libyan
Arab Airlines' security operations, prosecutors said he used his position to organise, prepare and carry out the Lockerbie bombing.

Fragments of clothing, found wrapped around the timing device, linked him to the attack.

He was also identified by Maltese businessman Anthony Gauci, who claimed he sold
items of clothing and an umbrella to a Libyan man who looked "a lot" like Megrahi three weeks before the bombing.

After a lengthy investigation by UK and US police forces, Megrahi was indicted in 1991.

However, years of lengthy diplomatic bargaining with Libyan leader Colonel Muammar Gaddafi followed before he was handed over for trial.

Megrahi and his co-accused, compatriot Al Amin Khalifa Fhimah, eventually faced a trial in 2000, conducted under Scottish law at a specially convened court at Camp Zeist in the Netherlands.

Costing an estimated £75m, it was one of the most complex trials ever staged.

His co-accused was cleared.

A first appeal against his conviction was rejected in March 2002.

Five years later, his lawyers successfully applied to the Scottish Criminal Cases Review Commission and the case was referred back to the Court of Appeal.

Eight years after he was found guilty of blowing up the jet, Megrahi dropped the appeal.

On August 21, 2009, Megrahi was released from Greenock Prison on compassionate grounds amid a storm of protest from victims' families.

But while many of the relatives are convinced of his guilt, there are some, particularly in Britain, who believe he was innocent.

I am 1 of the dissenting voices.
I ask you to read this link here. It will take you back to 11 post relating to this subject.
Some of them with praise, some of them critical, some of them questioning of evidence.

Please just have a wee read!

The 1 thing I know today is certain members of the British Government, Scottish Government and both the UK and USA intelligence services tonight are breathing a lot easier. The 1 man who remained, that knew the actual truth has now gone !!!!
Posted by The Last Of The Few at 19:16

First time at your blog so hello and I hope you're well.
Anyway, I too am one of the dissenting few, like yourself, who has the ability to think critically and wave emotion when important matters come to the fore.
It's obvious for any fuckwit who has a brain, to see that it's a cover up. It goes down with all the other great establishment/police 'stitch ups' that we all know of, such as the Birmingham Six and the Guildford four, to name but a few.

All I had to do was ask two questions to prove that he was innocent:

1. If he was released from prison on compassionate grounds, even though, we are told, he committed the worst terrorist attack in UK history, why then were the likes of Ronnie Kray along with no doubt thousands of other prisoners, held in UK prisons, allowed to die with various diseases?

2. If he was found guilty in a court of law, why was he released on compassionate grounds when the proper protocol should have been to be proven innocent at the appeal courts?

The whole thing stinks. And like the assassination of Saddam Hussein, Gaddafi was removed in order to stop the truth getting out about what really happened on the Pan Am flight 103, back in 1988. The defence team for Megrahi had info that would blow his sentence apart and prove that Pan Am flight was black ops, involving US & UK administration (most certainly Israel), just as in the recent 7/7 and 9/11 debacles.

It's disgusting. Worse still that people believe the MSM story and continue to support the SNP, complicit in the whole sordid affair.

I have no idea what actually happened, but there is no chance Megrahi was involved. A classic fall guy.

Mark: "1 of the dissenting voices"... You and, as you'll know, Robert Black QC FRSE, Professor Emeritus of Scots Law in the University of Edinburgh:

Perhaps Al-Megrahi's family should launch a civil case for loss of his love and affection by cause of incarceration and death by cancer (which he claimed, so I understand, was the result of the X-rays they made him have).