I wrote a piece last November about an incident where a group you young Muslim chaps burned poppies infront of people commemoration Remembrance Sunday............as a mark of a protest against British troops involvement in Afghanistan and Iraq.

Well the chief burner so to speak was up in court and well guess what....The moron who burned the poppies at the Remembrance Day service gets a £50 fine and outraged a nation. 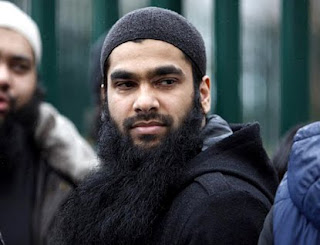 London Evening Standard wrote:- The Prime Minister told the Commons that a "stronger statement" should have been made to show public disgust at the man's action.
"I think to many of us, you look at something like that and feel that we should be making a stronger statement that the sort of behaviour is out of order and has no place in a tolerant country," he said.

Now a guy who burns a Koran in protest gets a 70 day prison sentence.


Cumberland News - A man who burned a copy of the Koran in Carlisle city centre was today jailed for 70 days.

Andrew Ryan, 32, of Summerhill, off London Road, was accompanied to Carlisle Magistrates' Court by supporters carrying a St George's Cross flag who were chanting "We love you England".


Ryan had pleaded guilty to racially aggravated harassment and theft of the Koran holy book from Carlisle Library at an earlier hearing.

Ok it wasn't his Koran, he stole/borrowed it from the library, however that normally involves just a fine not a custodial sentence, but 70 days for outraging Muslims whilst the moron who burned a poppy and outraged the nation gets only a £50 fine?


The word disproportionate seems to apply here. After all if some idiot artist can put on display a bible to be defaced and has nothing done to them. Then this guy should surely have expected the same, save I suppose that he didn't call it art.

I suspect Andrew Ryan will end up a hero in some quarters, despite the theft, I have to admit I don't like the idea of burning books, but I can see his motives, sadly though I now know the cost of freedom of expression and that's 70 days in jail.

Tips Hat to the Quiet Man
Posted by The Last Of The Few at 15:16