Menachem Begin was a terrorist and we should have hung him for his crimes at the time - as he deserved. But no, we miss our chance and like every bastard who puts on a suit and becomes a "revered international statesman" we're stuck being polite to him for a few decades.

This is what comes of it...as usual. 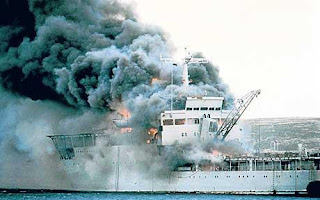 Israel secretly supplied arms and equipment to Argentina during the Falklands War due to Prime Minister Menachem Begin's personal hatred of the British, a new book discloses.


"He [Begin] hated the English above all; everyone had forgotten the British occupation, but not him" according to Lotersztain.

His colleague Jaime Weinstein agreed, saying: "He did all that was possible to help Argentina, selling her weapons during the Malvinas [the Argentine name for the Falklands] conflict." Israel needed a third party to help with the deal so that the British would not know that it was helping Argentina and this is where Peru, despite the fact that it had tried to broker a peace plan which Argentina rejected, came in.

Fine. That's one to remember when the chips are down next time in the Middle East.

My dad was put through the wringer on this wee island conflict, as a result I soooo look forward to all the Israel loving Brits to start banging on about how persecuted they are next time it kicks off..............feel free to email when it does and give me your thoughts.