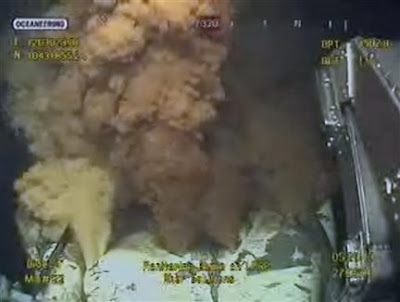 In june just passed I wrote a message to Obama about the Gulf Oil spill.

I was a little scathing.

I knew his mouthing off was to bolster flagging support for a failing President half way through his fist term and maybe not going to get a second.

Anyway a small boat has done some maths and I quote him.
Who can argue with a boat.............he is closer to the water that I will ever be.


The volume of the Thames at mid tide between Teddington and Gravesend is about 2.4 * 107 cubic metres (633 * 107 US gallons, or 127 times the total volume of the BP oil leaked). To replicate the 'environmental disaster' the Septics are claiming, I'll therefore have to empty 1.87 litres of engine oil into the river.
Now it appears that 75% of the oil has evaporated and a further 24% has been eaten by bacteria. The Armageddon merchants have crawled back in their (unpolluted) shells and the talk has switched to 'undetectable long term damage'


Now I am not decrying the loss of income, marine life etc.............I just wanted to get a perspective so when a politician come on TV shooting off at the mouth about why his daughter cries at the action or lack of action of a BRITISH Company.....who has 42% of its shares owned by Americans by the way.............we might just be a bit more factual.

Yes, I think there is some debate as to a second term and if people could turn back the clock a certain new pants suit wearing mother-in-law would be sitting in that seat right now.

And from what I've read (and I'm sure TLOTF may know more on this topic than I) and what many over here may not realize is that the former CEO of BP wasn't really demoted, he was sent to watch over one of the "crown jewels" of the BP empire in Russia. In fact the American who is now at the helm evidently couldn't handle the Russia project so they switched these guys around.