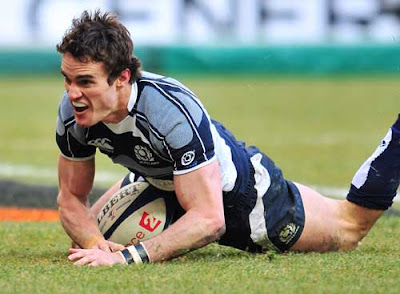 It is sad to read that Thom Evans has been forced to retire as a rugby player.

Thom was ever present as a winger for both Glasgow and Scotland.

However in the Six Nations game against Wales on 13 February 2010 Evans suffered a severe neck injury after colliding with Welsh player Lee Byrne. He was stretchered off the pitch and taken to hospital to receive treatment. He underwent a neck operation that evening. After four months of rehabilitation, Evans was forced to retire, after accepting medical advice.

Now The Lovely Trixie I feel will be in deep mourning over this news and may herself be forced into a period of rugby abstinance whilst she recovers.
Posted by The Last Of The Few at 10:07