Is Rugby Really a Sport with Honour??? 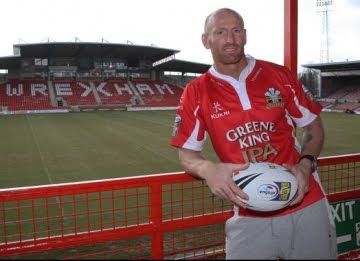 My love of both rugby codes in NEVER in dispute..............however my belief that it is still the game with honour now is.

This week the biggest story in rugby league has been the £40,000 fine handed down to Castleford Tigers because of the homophobic chanting directed towards Gareth Thomas by a certain number of fans a few months back.

Half of the fine has been suspended, but that will be small comfort to the Tigers as they also have to pay £20,000 suspended from a previous offence.

The prevailing mood among Castleford fans seems to be that the fine is too large; after all, £40,000 is a fairly hefty sum for a rugby league team. Some have questioned whether the punishment is fair given how difficult it is for the club to control chanting or shouting. It’s even been suggested that the Rugby Football League are using the incident to damage Castleford, with the intent of dropping them from Super League. However that is another arguement.

However, I will dispute the argument advanced by a few people, that this is all the fault of Thomas for not taking the abuse, or “banter” if you prefer, on the chin; he should have expected this kind of treatment and he’s obviously not tough enough to play the game. Some have even tried to defend the abuse meted out to Thomas as within the boundaries of free speech, and talk as though the punishment is an attack on our fundamental rights. Thomas has been criticised from some quarters for bringing the game into disrepute.

Suggesting that Thomas has brought the game into disrepute is as daft as suggesting that Frank Lampard is the one who brought soccer into disrepute, because it was he who pointed that the ball had gone over the line rather than covering up the fact that he’d been robbed of a legitimate goal. Whether or not Thomas should have expected this kind of abuse, that doesn’t mean he has to put up with it. He has the right to play the game without people trying to insult him, just as much as the fans do not have the right to hurl such insults. Freedom of speech? Not when the sole intent of saying something is to hurt someone else.

Perhaps the most disingenuous argument is to question Thomas’ toughness, which ranks as one of the silliest things anyone could say about him. His physical strength is there for all to see, just like anyone who has spent so long playing rugby, of either code, at any level. Yet his mental strength is also evident, having been incredibly successful despite being a gay man in that most heteronormative of environments, team sports. Maybe he isn’t the best rugby league player going, but that attests to a lack of all the appropriate skills – understandable given he’s only been playing the game a matter of months – rather than a lack of toughness.

Besides that, the punishment handed to Castleford isn’t just for Thomas’ benefit. Last year I wrote that referees ought to be shown respect, not because they don’t make mistakes, but because once abusing the referee becomes acceptable at the top level such an attitude filters down the levels. That’s dangerous because, while in a fully professional environment the referee isn’t likely to be in any danger, officials are in a much more precarious position refereeing amateur games. Similarly, the principle set by the RFL isn’t just for Thomas, it’s for others in the game who may be more vulnerable. There are literally thousands of rugby league players, and it’s hardly likely that Thomas is the only one who isn’t straight.

Some have argued that so much abuse goes on in rugby league that by deciding to clamp down so heavily the RFL have set a dangerous precedent. Yet I’m reminded of Jim Hacker, the fictional Minister for Administrative Affairs who was told the same thing and responded, “You mean that if we do the right thing this time, we might have to do the right thing again next time”. Others have wondered why if this incident is so bad then how come it’s acceptable to abuse someone for where they’re from, or if they’re ginger, or if they’re fat; why was it ok to laugh at Barrie McDermott for having one eye, or to call Sean Long a “gypsy”. Perhaps the answer is that these things aren’t acceptable, or at least that they shouldn’t be.

It’s probable that anyone who’s watched rugby league for any length of time has shouted or chanted something they regret, or ought to regret, but that’s no reason to just accept that such things happen. This kind of abuse – whether it’s racist, xenophobic, sexist, homophobic, or with reference to a disability – shouldn’t have any place in our game.


We should remember the words of Barbara from the Royle Family, who once declared, magnificently “Well, I don't care what anybody is – I don't care whether they're gay, straight or Australian”.