What a total WANKER ! 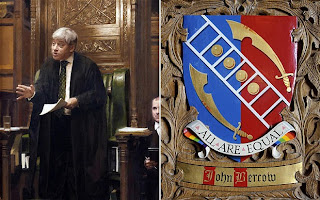 But every now and again something comes along that makes my urine boil.

The people of Buckingham are an absolute disgrace to the rest of the country .......... hang your heads in shame for voting him in !

The Speaker of the House of Commons also revealed his new official portrait by British artist Brendan Kelly, depicting him rising from his Speaker's chair and motioning towards the Government benches.

The total bill to the taxpayer is £37,000, prompting criticism from value for money campaigners, who said it was “very excessive at a time of public sector austerity” and only aimed at “boosting John Bercow’s ego”.

Mr Bercow’s official coat of arms sits in the frame of his portrait. It is dominated by a ladder, four roundels and two curved ‘seax’ knives.

The ladder represents Mr Bercow’s ascent from humble beginnings, as the son of a taxi driver in north London. He went to a comprehensive, before entering Parliament as MP for Buckingham and becoming Speaker in 2009.

The roundels mark Mr Bercow’s fondness for tennis – he is a qualified lawn tennis coach – and also represent his role as ex officio chairman of the Boundaries Commission of England, Scotland, Wales and Northern Ireland.

The seax knives, which were traditionally worn by Saxon warriers over 1,000 years ago, represent Mr Bercow’s attachment to Essex.

He went to university in the county, graduating in 1985 with a first class degree in Government.

The rainbow colours and pink triangles mark Mr Bercow's championing of the rights of lesbian, gay, bisexual or trans-sexual people. They sit between his motto: “All Are Equal”.

The red and blue colours, as well as the gold colour of the roundels, represent the three main parties in the House of Commons.

The coat of arms sits in the frame of the Speaker’s official portrait, which features him rising from the Speaker’s chair in the House of Commons.

In the portrait he is making a hushing motion to the Government benches in the Commons,while holding a Commons order paper, and wearing his gown, rather than the traditional Speaker’s robes and tights.

Last night his office said that the painting cost £22,000, along with another £15,000 for the frame and coat of arms “to keep the style of previous portraits”.

The portrait will hang alongside other recent Speaker portraits including those of Baroness Boothroyd and Lord Martin of Springburn in his apartment.

Mr Kelly said he had wanted “to capture the day to day reality of a Speaker mid-action at work in the Chamber”.

However the TaxPayers’ Alliance, which highlights waste in pubic spending, criticised the cost of the painting and coat of arms.

Mathew Sinclair, the alliance’s director, said: “It’s very excessive at this time of public sector austerity for the Speaker to spend tens of thousands of pounds on a vanity portrait of himself.

“Michael Martin was thrown from the job for wasting taxpayers’ money, so the current Speaker should be much more careful with how he spends our hard earned cash.”

A spokesman for the Speaker said: "The artist's fee is agreed through careful negotiation, balancing the prices artists can command for their work against strict value for money considerations.

"The portrait and the coat of arms form part of the Parliamentary Art Collection. This is a national collection which illustrates the history of Parliament and British politics over the century. The portrait remains the property of Parliament."
Posted by The Last Of The Few at 08:26